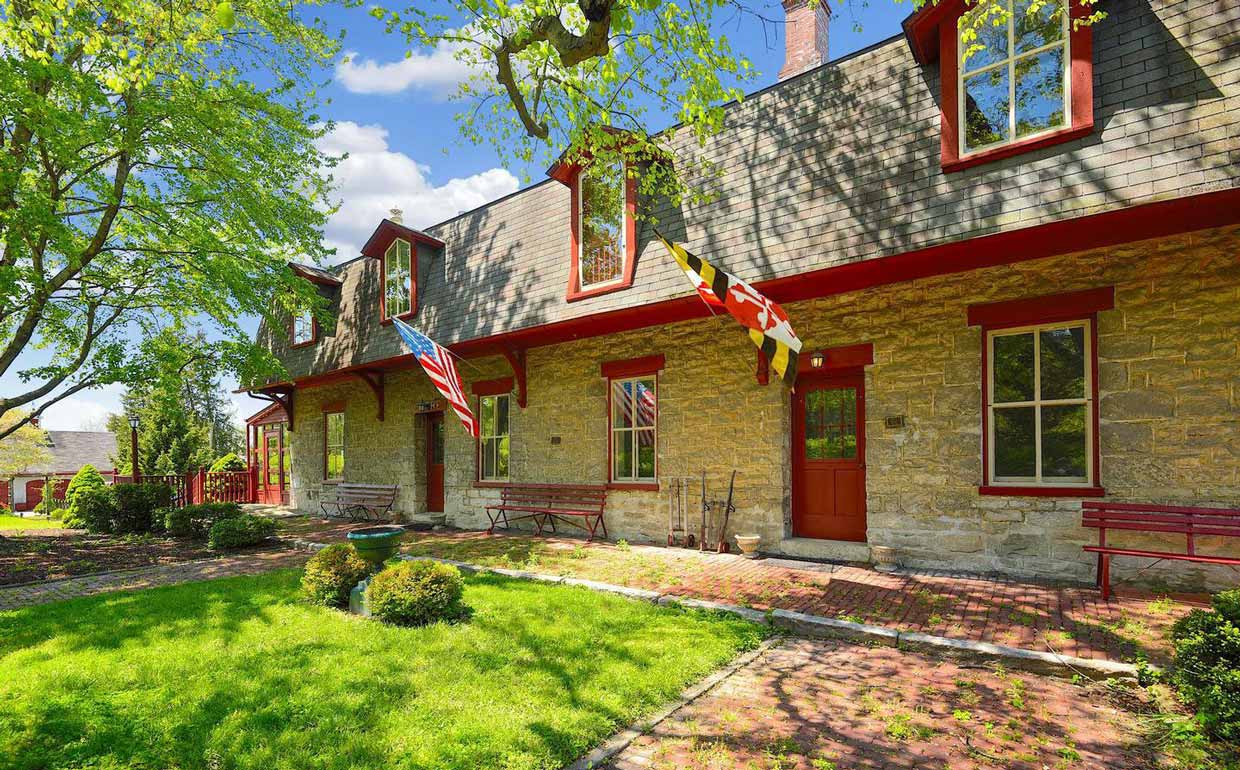 Lutherville started as a vision of the Rev. Dr. John Gottlieb Morris. He conceived a mission to provide moral and scholarly education for young women. In 1852, he enlisted the aid of his brother, Charles, and a fellow Lutheran minster, Benjamin Kurtz, in this cause that was radical for its time. To finance this proposed institution, they developed a land speculation that became Lutherville. The trustees of the Lutherville Female Seminary issued a prospectus seeking to attract families to “a neat and comfortable hamlet,” convenient to Baltimore via the Baltimore & Susquehanna Railroad. It was the first planned railroad community with two focal points: The seminary and the community church. It was conceived as a summer retreat from the heat and disease of the city. Dr. Morris set the architectural trend when in 1852 he built his home, Oak Grove, in the Gothic Revival style. It was followed by other summer cottages and a board house.

The rail company responded to this new community by building a train station in 1853. This was replaced in 1876 by the present standing stone structure. Besides providing commuter service for residents and students, the railway also brought mail and fresh groceries for the general store across from the station.

The first seminary building of limestone, in the Tudor style, was destroyed by fire in 1911 and was replaced by the present building within the year. From 1895, the school continued as the Women’s College of Maryland and in 1952 was converted to the College Manor Assisted Living Facility by the last college president, Dr. William Moors, III.

The Civil War divided the Lutherville Community as it did the rest of the nation. The residents hid their silver and valuables in a well or woodpile and Dr. Morris hid his horse in the woods. The story is told that some of “Gilmore Raiders” demanded the US Postal funds from the Rev. William Heilig, who was the postmaster at his home, Octagon House. When he refused, they drove his cattle into a swamp, now the beltway.

Before the urbanization of Baltimore County, Lutherville was an incorporated town that maintained roads, provided services and developed one of the oldest volunteer fire departments (1909). At first, all Christians met in the community church in the village square. Eventually separate houses of worship were built: St. John’s Methodist Church (1869), and the Episcopal Chapel of the Holy Comforter (1888). The community church became St. Paul’s Lutheran Church. The African-American community that has resided in Lutherville since Antebellum days built the Edgewood Methodist Church (1870). 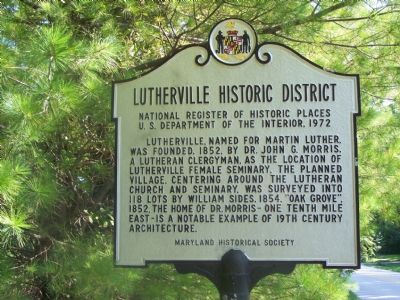 Lutherville Historic District Marker
There are two overlapping historic districts in Lutherville. Initial information on these districts and the implications for the community and the property owners is listed below, and additional information will be added later as it is developed.

The District for the National Register for Historic Places, the larger of the two Districts, was established in 1973, and is a Federal district, which offers some protection to the community from federally funded projects. If you have a contributing house within this District, you can apply for Tax Credits. The smaller Baltimore County District, which is totally within the National Register District, was established in 1987. The Construction Guidelines apply to all properties within this district and to the four properties on the Baltimore County Landmarks List.(302 North Ave; 311 W Seminary Ave; 215 Lincoln Ave; and 1401 Clarke Ave). The Tax Credit provisions apply to all contributing properties within this district and to the properties listed on the Baltimore County Landmarks List

The message here is for homeowners, who are planning to make changes, to contact the LAC early in their planning and work together to find a plan which is acceptable to the homeowner and LAC. When this is done the plan agreed to has a very high probability of getting approved by LPC. Also, a plan, if applicable, for taking advantage of the tax credits can be established so that it will receive approval from LPC.

The purpose of these historic districts is to preserve the historic nature of the community by encouraging restoration and preservation of existing homes, monitoring and approving external modifications and improvements to existing properties, and approving the external appearance of new structures within the district.

The Baltimore County Landmarks Preservation Commission (LPC) must review and approve all proposed changes to properties within all eleven (11) of the Baltimore County Historic Districts. Within each of these eleven district, a volunteer advisory committee of local residents is established to offer guidance to homeowners to help them get approval from LPC. 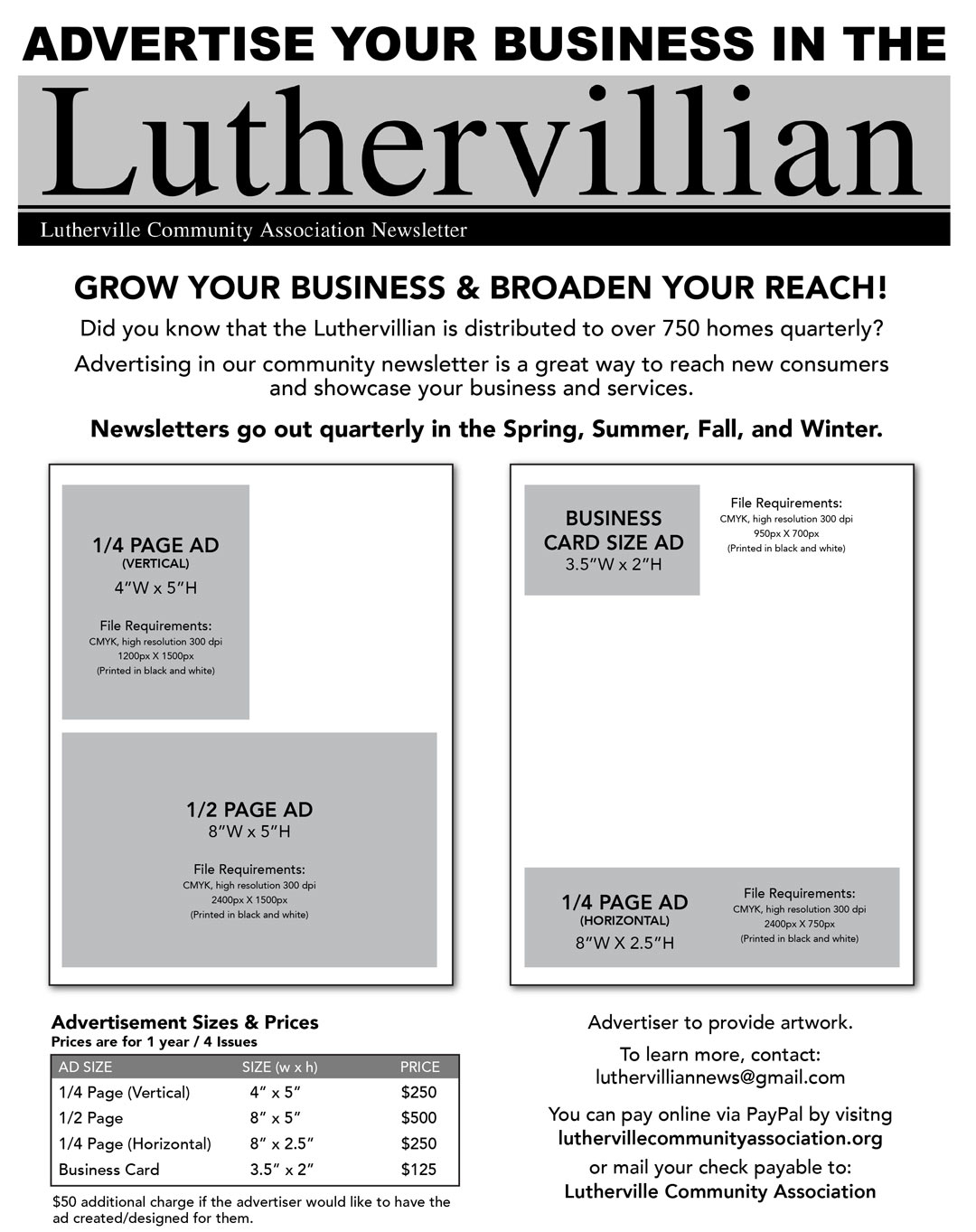 General meetings are open to members and interested parties. Meetings take place the second Tuesday of March, May and October and are held in Spangler Hall at St. Paul’s Church unless otherwise posted.

Board meetings are held on the second Tuesday in September, November, February, and April at 7:00 p.m. in Spangler Hall of St. Paul’s Lutheran Church. The meetings are open to members of the Association.